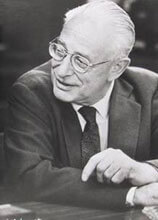 Michael Balint (Mihaly Maurice Bergmann) was born on the 3rd December 1896. in Budapest in a family of Hungarian Jews. His father, Ignac Bergmann, was a general practitioner. Mihaly (who changed his confession and name against his father's will) as a young man, practiced skiing, skating and boxing. Following his own interests, he had planned to study engineering but under his father's influence, undertook medical studies. The First World War, in which he took part on the front line in Russia at first and then in the Italian Dolomites, where he was injured, interrupted his education. After the war he resumed medical studies and graduated in 1920 in Budapest. His scientific contacts with Sandor Ferenczi, the first academic professor of psychoanalysis in the world date from 1919. Balint attended Ferenczi's lectures, underwent his own psychoanalysis with him, including training analysis, and remained under the influence of this outstanding psychoanalyst for many years.

When he was a young student Balint got interested in psychoanalysis thanks to Alice Szekely-Kovacs who drew his attention to the works of Sigmund Freud, especially Totem and taboo. Balint was also interested in chemistry, physics and mathematics. Alice became Balint’s wife and they shared common interests. Alice studied mathematics and was a friend of Michael’s younger sister (Hopkins, 1986).

In 1921 Michael and Alice Balint moved to Berlin. Michael worked there until 1924 in a biochemical laboratory of Otto Heinrich Warburg (1883-1970), later a laureate of the Nobel Prize in psychology and medicine (1931). His wife was employed in the folk museum in Berlin. In 1924, at the age of 28, Balint received his doctorate in biochemistry. His thesis subject was the iodometric determination of sodium. At the same time he maintained his interest in psychoanalysis and the unconscious mechanisms of the human psyche. Under the direction of Hans Sachs he increased and deepened his knowledge of this subject.

His interest in psychoanalysis made him recognize the major importance of the doctor patient relationship in the course of treatment. In 1923 he published his article Psychoanalyses in the Service of the General Practitioners and around that time he also became interested in psychosomatic medicine (Hopkins 1987a).

In 1924 the Balints returned to Budapest where their son Jonas was born in 1925. Balint started to work as assistant in the Medical Institute of the University Clinic and maintained his scientific contacts with Sandor Ferenczi. In 1926 he became a member of the Hungarian Psychoanalytical Society of the Institute of Psychoanalyses in Budapest and become its Deputy Director in 1930. After the death of Sandor Ferenczi in 1935 he became Director. In the 30's Balint introduced psychoanalysis to improve the general condition of his patients with excellent results (Hopkins,1972).

Budapest the end of 30's was a period of growing Nazi repression against the Jews. Balint and his family had to leave their homeland again. He was invited to Manchester by the then president of the International Psychoanalytical Society, Dr Rickman, and in 1939 immigrated to England. His working career in England started in Manchester Northern Royal Hospital and at the same time he began post-diploma studies in psychology. A few months later Alice died and was left alone with his son.

During his psychological studies he obtained a doctorate in medical sciences on the basis of his dissertation Individual Differences of Behavior in Early Infancy. This research inspired him to develope the object-relation theory (Balint 1954;1955). Balint’s object/relation theory is original and differs from the English school with its assumptions of Analogical Concepts (e.g. Melanie Klein) or the American school of Ego Psychology (Balint, 1948b). In 1944 Balint married Edna Oakshott but their marriage ended after a short time and in early 1945 he suffered another personal trauma, when he received news of his parent’s suicide. They had taken this course to avoid Nazi persecution.

His father endured many humiliations after his arrest and subsequently suffered a mental breakdown. The same year Balint moved to London with his son where he remained, until his death. During the Second World War, Balint trained social workers and demonstrate the use of psychology in improving their professional activities.

This experience helped him after the war, when a reform of a health care system was carried out in Great Britain and the National Health Service established in November 1946. The whole population was now cowered by a universal free health care system. The main role was entrusted to general practitioners who had the onerous task of delivering free universal health care. They were responsible for the health care of patients and their families and these included medical, psychological and social aspects of care. A general practitioner was expected to know all the patients in person, be able to help them over a wide range of problems and possess the required competencies, skills and knowledge for effective medical diagnosis and therapy. These tasks often exceeded the abilities of physicians at the time.

Michael Balint involved himself in the process of general practitioner’s education and offered them his innovative program. In 1945 as a psychology graduate, he started to work with practicing physicians, in 1947 he was permitted to practice psychoanalysis professionally and he became a member of the British Psychoanalytical Society. He believed that in different roles of psychoanalyst, psychologist, and medical doctor, he could solve many problems that surface in general practice. In his opinion doctors did not have to undergo a specific training and become psychoanalysts. Instead, he proposed in a different approach that was novel at the time. This looked critically at the doctor-patient relationship. He aimed at increasing the skills of general practitioners, especially their competence in psychology. He started training seminars in the Tavistock Clinic in 1950. The discussion seminars for GPs took into account the specifics of their profession, their expectations and their conditions of work. With a team of fourteen GPs and a psychiatrist, he launched a research project aiming at an in depth analysis of the doctor –patient relationship.

The conviction underlying the program was that a person’s psyche could be best understood when directly dealing with the person. Mental health problems are therefore reflected in the relationship into which the patient enters with the physician. In Balint’s opinion, the most beneficial form of GP education is the discussion seminar in which authentic and specific cases from the participants practice are discussed. When doctors reported difficulties experienced during their contact with a patient, they talked about their emotions and associated feelings, shared their doubts and discussed proposals to solve a particular situation (conflict). Initially Balint led the group and a psychiatrist participated in the interpretation of cases. Methods of group work and understanding of their objectives evolved over many years and was reflected in the author’s publications.

Balint’s disciple and colleague Philip Hopkins later published valuable information about Balint and his group, including his biographical details some of which has been used in the present chapter. Balint worked in the Tavistock Clinic near London and in the University College Hospital where he continued his analysis of the doctor-patient relationship and trained GPs till the end of his life. He believed the best medicine is the doctor himself (Balint,1957) and in 1958 he started training medical student. The training was received very enthusiastically (Hopkins, 1987b) . In 1958 Balint married Enid Flora Eicholz whom he had met nine years earlier in Tavistock. They worked together in what were later named Balint groups, after their founder.

Michael Balint thought that without reaching the core of the doctor-patient relationship and understanding its context, the doctor’s work is nothing other than what he termed “apostolic zeal”. This refers to the health care worker’s conviction that only they, the medical professionals and specialists, are knowledgeable enough to help the sick. Such an attitude destroys communication, hinders cooperation in the treatment as a result renders the therapeutic encounter ineffective. It is then impossible to use the medicine i.e. the doctor himself and his relation with the patient. The key objective of the doctor according to Balint, is contact with the patient.

Let us review once again Michael Balint’s personal and professional path. His accomplishments are evident in many domains. Together with his wife Enid who worked in the Institute of Interpersonal Relations in Tavistock, he trained social workers in marital therapy. They created a partner therapy model operated by two therapist established case discussion seminars. In 1952 Balint initiated training in discussion groups for therapist dealing with psychosexual disorders in the Family Planning Association. He also established The Institute of studies on Psychosexual Disorders.

In 1968 he was elected president of the British Psychoanalytical Society. During a quarter century of Balint’s work with groups and training doctors, his opinion continued to evolve and his character was non-dogmatic, which is rare in psychoanalysts. Balint was convinced that the effectiveness of his method increases as doctors acquire practical professional experience. He believed that improvement in group work requires a combination of didactic efforts and on-going assessment of the method’s effectiveness by the participants. In his last years, Balint suffered from diabetes and glaucoma. He died in London on the 31th December 1970.

His wife, Enid, worked with him until his death and was his co-leader in the group work. After Balint’s death she continued his work in practice and in numerous publications (see i.a. Balint, Balint E.,1961; Balint E., Courtenay, Elder, Hull, Julian, 1993). Balint’s ideas are still alive and promoted by Balint Associations in many countries of the world. They are used in clinics and institutes named after him, for example Michael Balint Institute fur Psychoanalyse, Psychotherapie und Analytische Kinder-und Jugendlichen psychotherapie in Hamburg.